Kickstarting our Climate Conversations in NSW

One of our Team Leaders, Carly Robertson, recently headed to NSW to kickstart our Conversations, support facilitators and start collaborating with local climate groups. 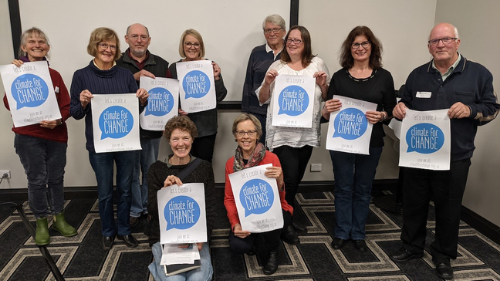 At the end of March, Team Leader Carly made the trip up to New South Wales to kick off our Conversation Program there and support our burgeoning facilitator team in Sydney. She facilitated six Conversations in as many days in the Northern Beaches and the Southern Highlands, from Avalon Beach (during a torrential downpour) to the Mittagong RSL.

Carly has teamed up with local climate groups to promote our Climate Conversations, and we are excited to be working with the Northern Beaches group Our Blue Dot, North Sydney Climate Act Now and Hunters Hill Habitat group. WinZero in the Southern Highlands have also jumped on board, which also got us into the local paper!

We have already had some great stories come out of these Conversations.

One of the hosts has started his own neighbourhood action group with the guests from his Conversation – some who had never met each other before! They have had three meetings so far to discuss everything from a street-wide composting program to community solar projects for local buildings, and of course encouraging more local conversations about climate.

An attendee with climate-denying neighbours learnt about the importance of instead focusing on talking to the people around them who are concerned about climate change, but not yet committed to change (the majority of Australians!). Our new Climate Conversation Guide drove this point home and helped guests with more ideas on how to start conversations with their networks.

A nearby group, formed from another of these Conversations, has met to write letters to their MP about climate policy, in particular around the uptake and support for electric vehicles.

Thank you to Carly for her amazing work in kicking off our Conversations in NSW. We can’t wait to see what further impact this will have in the future!